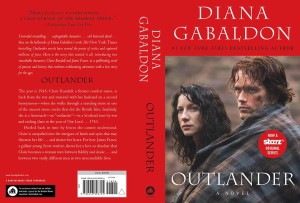 Diana Gabaldon has just posted the official mass market and trade paperback tie-in cover for Outlander, which is set to hit stores and online retailers on July 1st.  The new cover artwork showcases one of the recently-released stills from the television production, featuring Caitriona Balfe and Sam Heughan as Clarie and Jamie.

What do you think of the tie-in cover?  Do you like the production still they used to represent the book?